Important update from the author

I will try to update this repo over the winter break as I want the game meta to stabilize a little. Stay tuned!

dota2-predictor is a tool that uses Machine Learning to predict the outcome of a Dota 2 game and suggest the best last pick. Moreover, it helps the users visualize various statistics of the datasets (e.g. hero maps, synergies, counters). The project achieves roughly 0.65 ROC AUC score using Logistic Regression and Neural Networks. The code is used mainly for creating models used by dotadamus.com.

The project requires a handful of python2.7 packages. Install them using:

You can find all the functions this tool has in api_examples.py.

Mining the first 1000 games between two valid match IDs and saving them to a file is as simple as:

The result will be a CSV file with the following format:

When loading a dataset, additional preprocessing through feature engineering is done. We define advantages two (number_of_heroes, number_of_heroes) matrices that give a score for synergy and counter between each combination of heroes.

For the entire dataset, these advantages are already precomputed, but they can be overwritten through the read_dataset method:

This example recomputes advantages and uses them automatically as features in the dataset, while filtering games between 2000 and 2500 MMR.

Training and evaluating a model

The algorithm used for training is Logistic Regression and the evaluation is done through cross validation. The trained model can be saved to a pickle file for later use. The cross validation is done on the train dataset and the final accuracy scores (ROC AUC and raw accuracy) are on the test dataset.

There are two type of queries you can do:

For the first query, a simple result is shown (e.g. Radiant has 53.42% chance to win). The second query has a more complex output: tuples of (hero, (win chance, similarity inside team)). We define similarity a score that represents how close two different are role-wise. We use this metric in order to filter out heroes that do not match a team composition (e.g. you do not want a 5 carry team even if they have very high winrates separately). The similarities can be analyzed in a hero map in the next section.

For better understanding of the data, plots can be created with ease:

Here are some examples, but more can be found here, where they are also interactive: 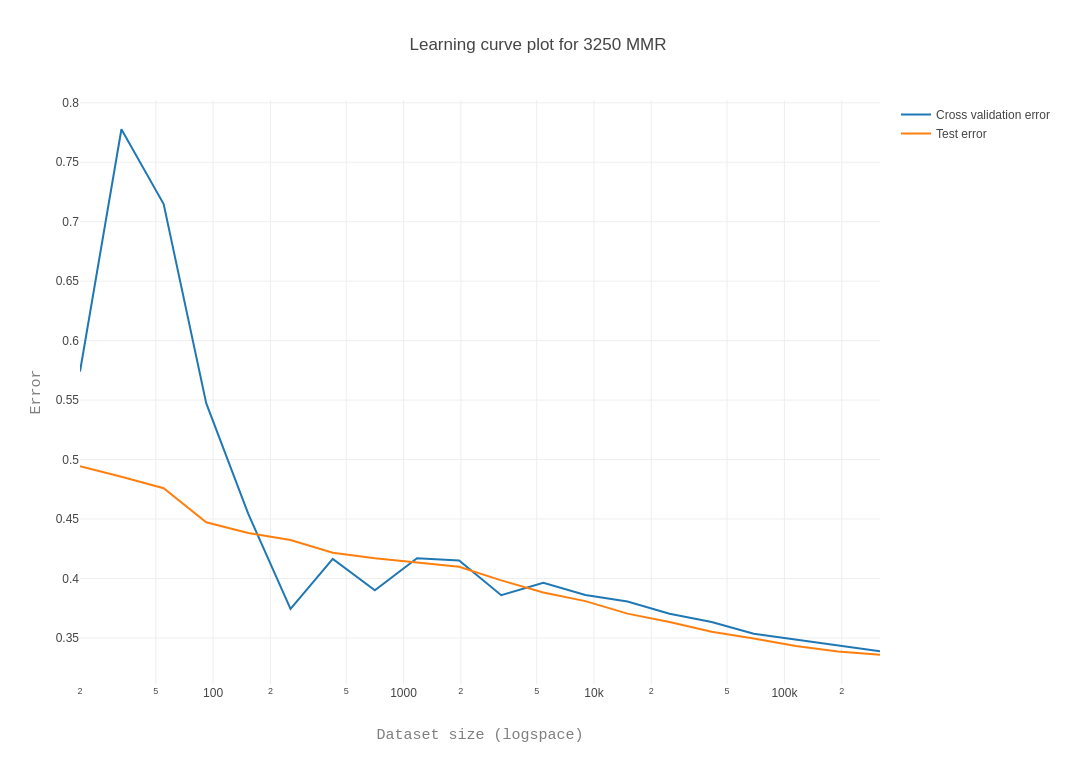 This is a hobby project started with the goal of achieving as high accuracy as possible given the picks from a game. After great response from the community, I decided to look for a collaborator who would help me implement a web app for this tool (web development is not really my thing), as previously it was hard to use.

I was lucky to find Michael, a talented student who shares the same passion as me for gaming and programming. He was able to create the website from scratch using what I previously implemented and set everything up for deployment.

The website is not indended to make money and all the expenses are on my side, but as long as people visit it and the servers hold enough traffic, I am the happiest person in the world.

This tool is up-to-date with the current patches and does a decent job predicting your best possible last pick given a situation in order to give you that little extra chance that turns the tides in your favor.

Good luck in your matches and game on!