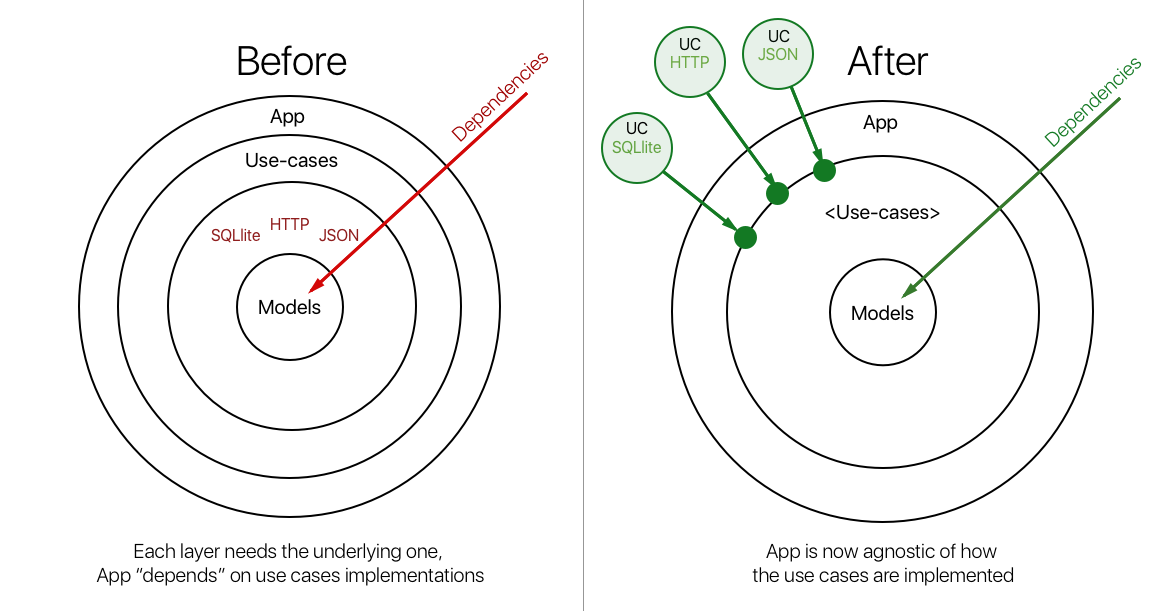 Because the classic way of building iOS Apps introduces tight coupling, often with the network layer. Dependencies grow and code is harder to test.

By providing a simple convention on how to cleanly plug implementations in an iOS App. Developers spend less time architecting and more time adding value for their users.

Download and launch the Example Project to see how a Typical LikePhoto use case would be implemented using this approach.

The main idea is that you want to decouple your App from it's delivery mechanisms.

Let me rephrases that for you in a classic iOS App context. Your ViewControllers should not know how an action is performed. For instance when you like a photo, the controller should'nt know if it's going to send a web request, a database command, or even a local request. The ONLY thing it should know is : "I want to like this photo"

This is based on Robert-C Martin (Uncle Bob) thoughts, the guy behind the SOLID principles. You can watch one of his terrific talks here : https://skillsmatter.com/skillscasts/2437-uncle-bob-web-architecture His examples are often written in Java, and the swift examples I came across were often Java directly translated into swift.

This is an alternative approach aiming at the same goal, but leveraging swift awesomeness.

The entire Approach is built on the concept of Actions. An Action has an Input and an Output.

For instance in the case of liking a photo, the LikePhoto action has an input of Photo and an Output of Promise<Void>

A cool thing is that Output can be synchronous or asynchronous, it's yours to choose \o/.
Here is how our App defines the LikePhoto use-case :

Note : This uses dependency injection behind the hood to provide the concrete LikePhoto implementation at runtime.

This phase is optional. But software is built for humans and we want this to be as readable as possible !

We can now Inject this implementation in our App form the AppDelegate :

Or if you prefer the short version :

All the LikePhoto actions of our App will now use our concrete Implementation preforming a network call :).

This is now super easy to provide a dummy MockLikePhoto for testing purposes!

Using this approach we have:

🔌 Plug implementation details for a cleaner Architecture on iOS