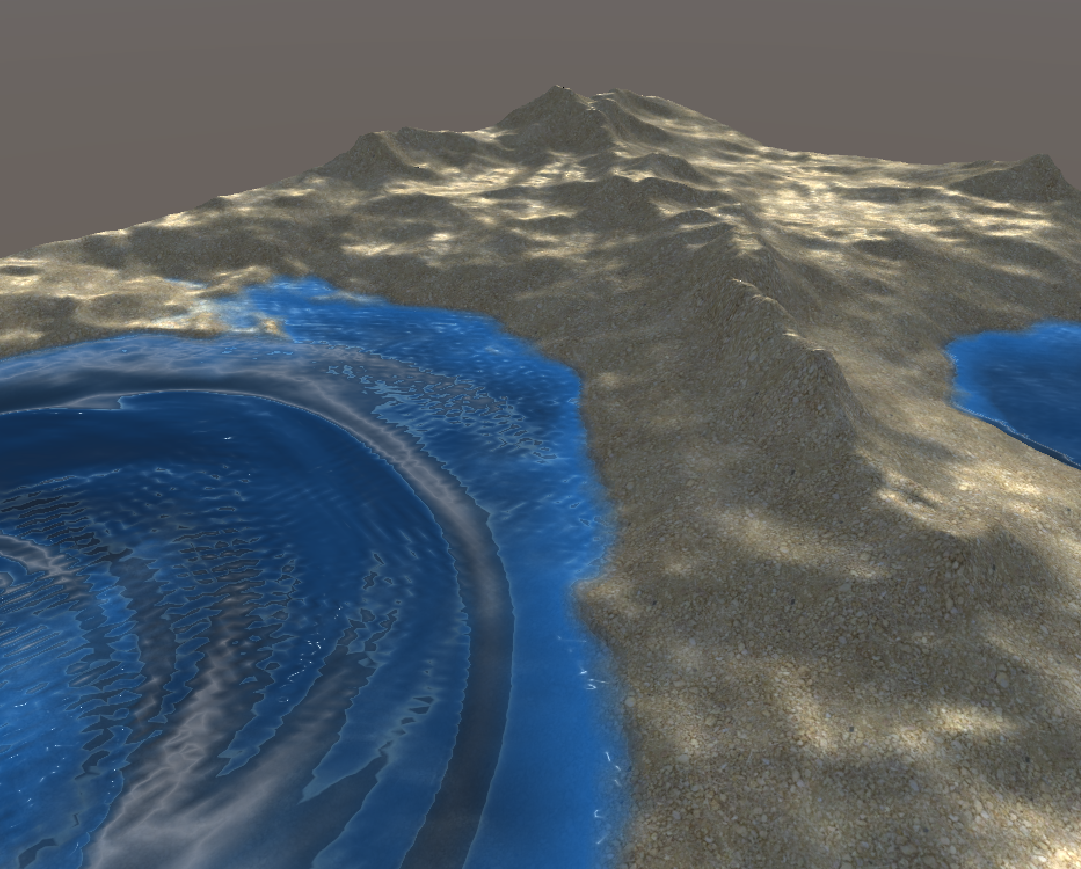 This is an example implementation of hydraulic and thermal erosion with shallow water equations. My initial motivation was to implement a game mechanic like in the From Dust game.

This project is still in progress. Hydraulic erosion requires a bit more parameter tweaking and revisiting the actual implementation. But overall it works.

Just run Main Scene and use the mouse to draw modify terrain/water.

Explanation is still in progress...

We first need to list all the data we will operate with during the simulation. Since we are using a grid-based simulation we will need some per-cell information. Assuming we have a grid of size

and current cell coordinates are

We need to increase the water amount from water sources (e.g. rain). Right now the brush-drawing is omitted for clarity, but it happens in this step.

And repeat for other directions. Then we need to compute the outgoing amount of water from the current cell to the neighbors (in each direction) which is proportional to the volume diefference - height difference

and also repeat the computation for each direction.

- is a special scaling factor to prevent situations when total outflow in 4 directions is higher than water volume in cell (since each direction is computed independently). Thus

is defined to split the scale the outflow accordingly - cell water volume divided by total outflow per single step:

If outflow will exceed the total volume, the fraction will be less than 1 thus flow will be reduced.

If we need the water to bounce off the walls we need to disable outgouing flow at the boundaries:

At the end of this step, we got all the outgouing flow computed at each cell so we now need to use this flow information to adjust the height of the water.

outgoing flow is the same as at the previous step.

incoming flow is the outgoing flow from neighbor cells in opposite directions.

The total volume change of the column is:

Finally apply the volume change to the water column, since we store the height and not the volume we need to divide by cell area:

And that's it for water flow. It is also called shallow water equations using pipe model. At the end of this step, the water can slide down the terrain, create vertical waves and so on. But to apply erosion we will need to do more stuff.

the velocity in each axis is the average total flow in each pipe along that axis. So for

axis we have 2 neighbor cells:

, thus we can compute the total flow for each neighbor and average across neighbors.

Note: This is only partially physically accurate. For the true velocity - this amount should be scaled by something (include pipe area and length).

While water flows over terrain it takes (erodes) and transports some amount of soil. After a while, some suspended sediment will be deposited to the ground. This process is mostly defined by the sediment transport capacity of the water flow. There are many complex models regarding these processes, but we will use the simple empirical equation: