This repo builds release wheels and source packages for Python libraries available as GitHub repositories. We're currently using it to build wheels for spaCy and our other libraries. The build repository integrates with Azure Pipelines and builds the artifacts for macOS, Linux and Windows on Python 3.5+. All wheels are available in the releases.

🙏 Special thanks to Nathaniel J. Smith for helping us out with this, to Matthew Brett for multibuild, and of course to the PyPA team for their hard work on Python packaging.

⚠️ This repo has been updated to use Azure Pipelines instead of Travis and Appveyor (see the v1 branch for the old version). We also dropped support for Python 2.7. The code is still experimental and currently mostly intended to build wheels for our projects. For more details on how it works, check out the FAQ below. 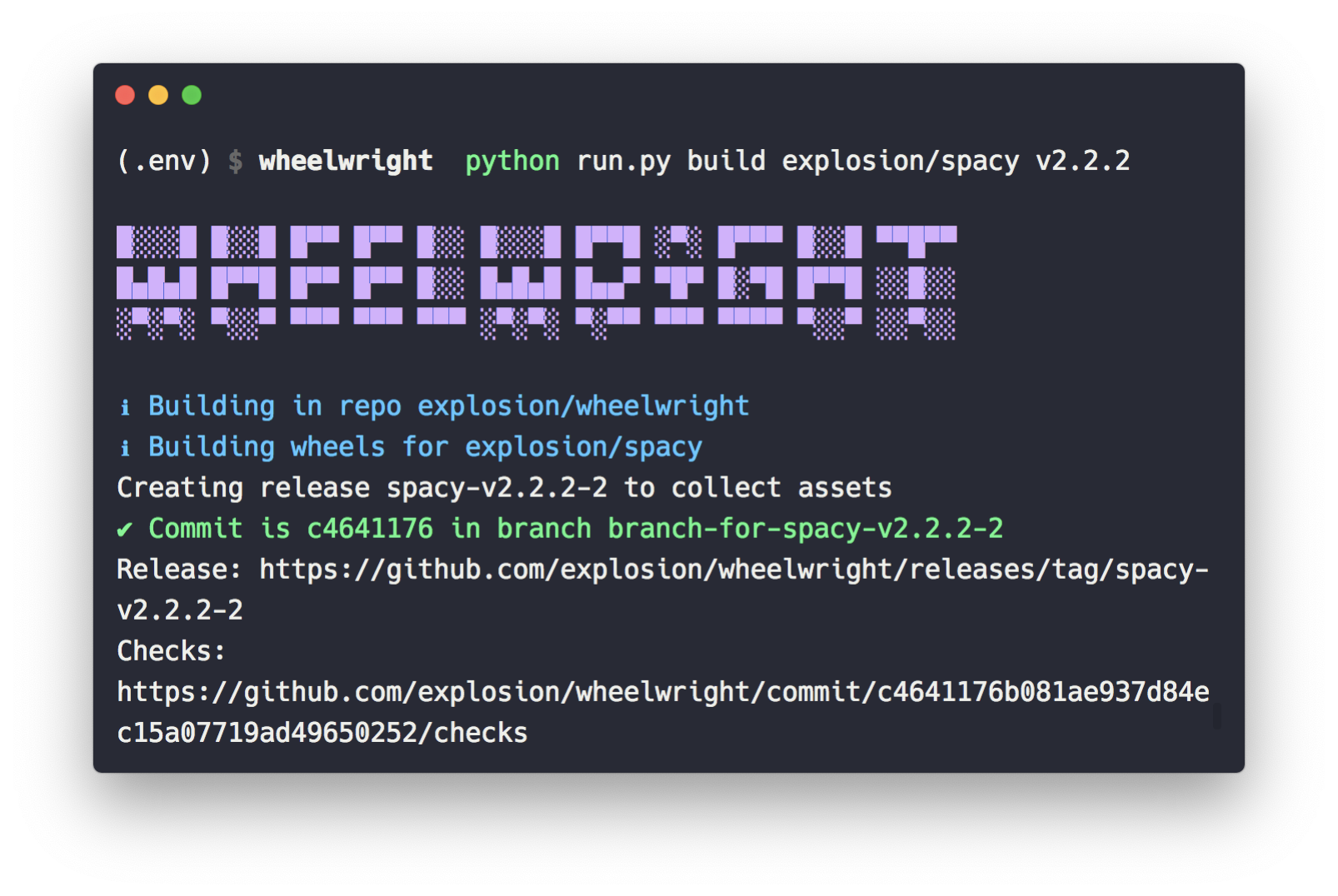 Wheelwright currently makes the following assumptions about the packages you're building and their repos:

Make a local clone of this repo:

Next, install its requirements (ideally in a virtual environment):

Click here to generate a personal GitHub token. Give it some memorable description, and check the box to give it the "repo" scope. This will give you some gibberish like f7d4d475c85ba2ae9557391279d1fc2368f95c38. Next go into your wheelwright checkout, and create a file called github-secret-token.txt and write the gibberish into this file.

Don't worry, github-secret-token.txt is listed in .gitignore, so it's difficult to accidentally commit it. Instead of adding the file, you can also provide the token via the GITHUB_SECRET_TOKEN environment variable.

Note that the run.py script requires Python 3.6+. If you want to build wheels for the v1.31.2 tag inside the explosion/cymem repository, then run:

Eventually, if everything goes well, you'll end up with wheels attached to a new GitHub release and in Azure Pipelines. You can then either publish them via a custom release process, or download them manually:

In Azure Pipelines, the artifacts are available via the "Artifacts" button. You can also set up a release pipeline with twine authentication, so you can publish your package to PyPi in one click. Also see this blog post for an example.

Build wheels for a given repo and commit / tag.

Download existing wheels for a release ID (name of build repo tag). The downloaded wheels will be placed in a directory wheels.

What does this actually do?

The build command uses the GitHub API to create a GitHub release in this repo, called something like cymem-v1.31.2. Don't be confused: this is not a real release! We're just abusing GitHub releases to have a temporary place to collect the wheel files as we build them. Then it creates a new branch of this repo, and in the branch it creates a file called build-spec.json describing which project and commit you want to build.

When Azure Pipelines sees this branch, it springs into action, and starts build jobs running on a variety of architectures and Python versions. These build jobs read the build-spec.json file, and then check out the specified project/revision, build it, test it, and finally attach the resulting wheel to the GitHub release we created earlier.

What if something goes wrong?

If the build fails, you'll see the failures in the Azure Pipelines build logs. All artifacts that have completed will still be available to download from the GitHub release.

If you resubmit a build, then run.py will notice and give it a unique build ID – so if you run run.py build explosion/cymem v1.31.2 twice, the first time it'll use the id cymem-v1.31.2, and the second time it will be cymem-v1.31.2-2, etc. This doesn't affect the generated wheels in any way; it's just to make sure we don't get mixed up between the two builds.

As a package maintainer, what do I need to know about the build process?

Some things to note:

The build/test phases currently have varying levels of isolation from each other:

We use the same requirements.txt for both building and testing. You could imagine splitting those into two separate files, in order to make sure that dependency resolution is working, that we don't have any run-time dependency on Cython, etc., but currently we don't.

We assume that projects use pytest for testing, and that they ship their tests inside their main package, so that you can run the tests directly from an installed wheel without access to a source checkout.

For simplicity, we assume that the repository name (in the clone URL) is the same as the Python import name (in the pytest command). You can override this on a case-by-case basis passing --package ... to the build command, but of course doing this every time is going to be annoying.

Aside from modifying setup.py, there isn't currently any way for a specific project to further customize the build, e.g. if they need to build some dependency like libblis that's not available on PyPI.

What do I need to know to maintain this repo itself?

Internally, this builds on Matthew Brett's multibuild project. A snapshot of multibuild is included as a git submodule, in the multibuild/ directory. You might want to update that submodule occasionally to pull in new multibuild fixes:

Multibuild was originally designed to do Linux and macOS builds, and with the idea that you'd create a separate repo for each project with custom configuration. We kluge it into working for us by reading configuration out of the build-spec.json file and using it to configure various settings. Most of the actual configuration is in the azure-pipelines.yml file.

I'm not Explosion, but I want to use this too!

It's all under the MIT license, so feel free! It would be great to somehow convert this into a generic reusable piece of infrastructure, though it's not entirely clear how given how Rube-Goldergian the whole thing is – you can't just slap it up on PyPI. (Maybe a cookiecutter template that generates a repo like this?)